UCS can offer Active Directory (AD) services. Thus, Windows computers can join the domain in the same way as joining a Microsoft based Active Directory domain. An unsuccessful join can occur for various reasons. The following steps should be checked in case the join fails.

1. An Active Directory Domain Controller for the domain domainName.net could not be contacted.

In case a message similar to “An Active Directory Domain Controller for the domain domainName.net could not be contacted.” is shown, 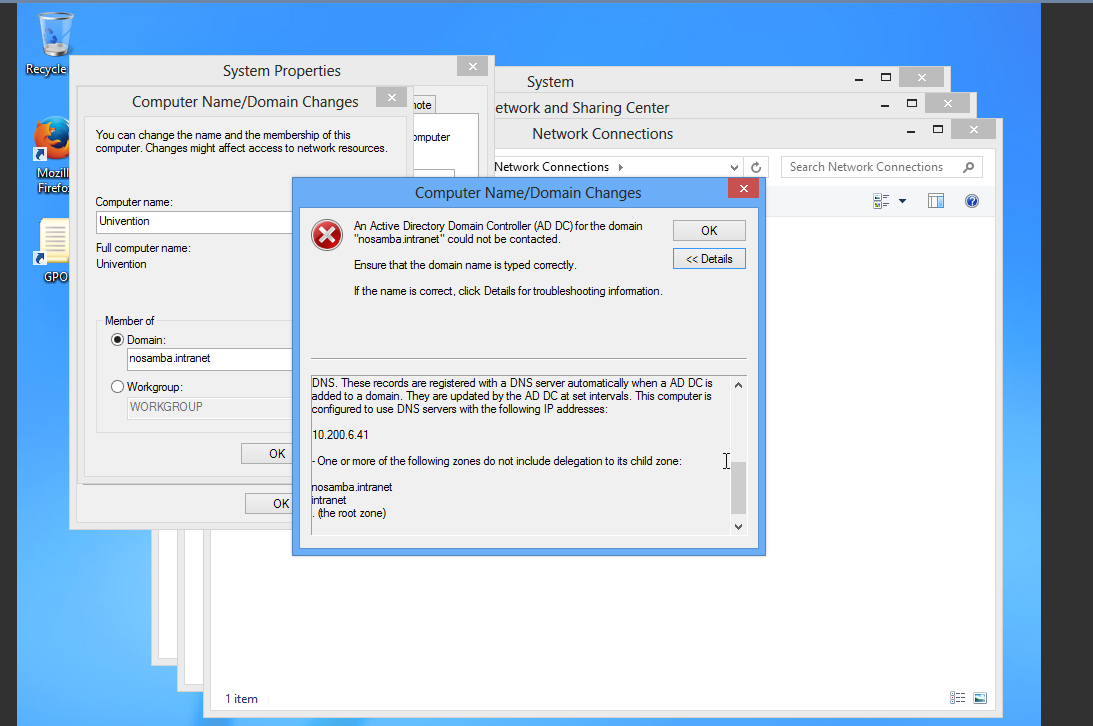 Below are details of the above message:
The following error occurred when DNS was queried for the service location (SRV) resource record used to locate an Active Directory Domain Controller (AD DC) for domain “nosamba.intranet”:

The error was: "DNS name does not exist."
(error code 0x0000232B RCODE_NAME_ERROR)
The query was for the SRV record for _ldap._tcp.dc._msdcs.nosamba.intranet
Common causes of this error include the following:
The DNS SRV records required to locate a AD DC for the domain are not registered in DNS. These records are registered with a DNS server automatically when a AD DC is added to a domain. They are updated by the AD DC at set intervals. This computer is configured to use DNS servers with the following IP addresses:
10.200.6.41
One or more of the following zones do not include delegation to its child zone:
nosamba.intranet
intranet
(the root zone)

The following steps should then be checked:

The process of a Windows client joining a UCS domain, requires the use of a DNS server. This server contains the record for each DC in the domain. In the client computer, some informations are entered that will help it locate a domain controller. These informations include:

When the join button is clicked the Netlogon service on the client uses the collected information to look up a domain controller for the specified domain, following the steps below:

2. The specified server can not perform the requested operation:

The following message may appear after a successful domain join;

This indicates a successful domain join, but the Windows client could not register its IP address in the DNS for its host name. There can be a number of reasons for this:

By default Windows clients attempt to register their IP address with the DNS server after every system starts. This procedure can be done manually in one of the following ways:

If join is still not successful despite the above measures, then it is important to take the following steps to check the log files for errors:

Tcpdump can be used as a debugging tool, to check the network transmission between the AD DC and the windows client.

For more information on tcpdump:

How to install and use TCPdump (capture packets)

Introduction In this tutorial, we’re going to bring you a popular network tool you should know about in order to correctly manage your networks. We are assuming that you have root permission, otherwise, you may start commands with “sudo”. Install...

For more information on how windows joins a domain: