I am trying to configure my VMware Vsphere to authenticate from UCS server.
I am getting an error.

Please let me know if any article available.

Pleasea help me on this…
I am getting below error…

The “Add identity source” operation failed for the entity with the following error message.

MY Vcenter is running Photon Linux.

I don’t know of a guide, but we do have your vCenter 6.5 joined into our UCS-based ActiveDirectory domain. With that setup assigning permissions based on AD users & groups as well as logging in with AD credentials works just fine.

Can you show a screenshot of the settings you’re trying? Unfortunately it’s been quite a while, and I don’t remember clearly what the corresponding dialogs looked like.

I had added my UCS based Active directory but after adding the ldap server we are not able to list users/groups.

Here is the Guide… 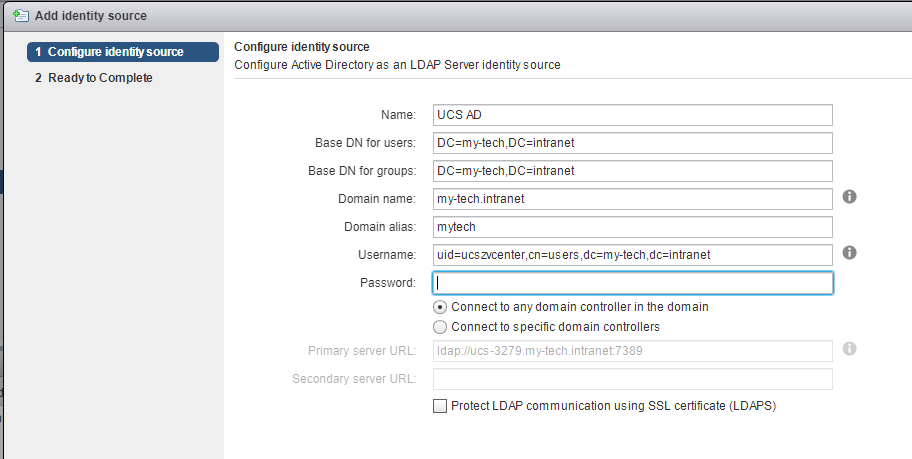 what should be the permission of the user which I am using for ldap in Vcenter? is it required special permissions?

I just had a quick glance at your screenshot:
if you are connecting to the Samba Active Directory (default LDAP ports 389 or 636) you have to use cn= for the username and not uid=. That’s also used in the guide that you linked to.

Currently the issue is, Vcneter is able to connect ldaps server but not able to list all users/groups.

can please share your identity server setting from Vsphere Web Client? if possible.

sure. Here’s what works for us. In the next panel (“upload certificates”) I uploaded the machine certificate for our DC Master if I remember correctly. You can find that on your DC Master in /etc/univention/ssl/<machine-name>/cert.pem.

in a UCS system there are two LDAP servers: the one where you create objects in via the UMC (OpenLDAP) and the one provided by Samba. There’s a bi-directional sync between both. Both use slightly different LDAP schemes, and therefore the objects are named slightly differently.

it’s an old Thread, but I wanted to leave a few links about the documentation Vmware provides - beside using the Active Directory Services of Samba, VSphere also supports OpenLDAP with a schema extension:

I haven’t tested those, would be nice to get feedback about the OpenLDAP based integration.