Shares not appearing in users Home share drop down

I have several shares made but only ONE of them will show in the dropdown for “Home Share” in the POSIX section in the Users > Account section. What makes a share appear or not appear in this list? I’ve compared the share available and the share I want to use I don’t see why one shows up and the other doesn’t.

As home directories are mounted via NFS, only those shares are offered. Pure Samba shares aren’t. The corresponding option is Export for NFS clients (NFSv3 and NFSv4) on the [Options] tab.

Here’s teh problem. There is no way to change “NFSHomeDirectory” attribute in UCS. It always has “/home/” prepended to it. Well if you see the “Home Directory” and “SMBHome” attributes, you can see it’s not “home” but “users”. I cannot edit this attribute either and change it to “/users/” like it should be.

Please post the output of running the following command on your DC Master: univention-ldapsearch uid=nfstest1

The QNAP support site has a pretty good article on how to set up macOS for connecting with OpenLDAP including screenshots. Please verify that your settings match the ones described there, especially the screenshot in step “g. Find “Users” > “NFSHomeDirectory” on the left side of “Record Types and Attributes”.”

Moritz, That is not applicable when a Mac is bound to UCS through Active Directory. I’m sorry if that was not clear in my original post. The original problem still stands that only one of my 20 or so shares system wide shows up in the “Home Share” drop down in Users > Account.

Do you see my frustration now?

I’ve tried to make this clear but we are losing something in translation. I really do like UCS, it’s a great product but it has some problems that are holding us back and I want to work with you guys in fixing them. Apple is killing off it’s server software and I really need a go to solution and I would prefer that to be UCS.

The original problem still stands that only one of my 20 or so shares system wide shows up in the “Home Share” drop down in Users > Account.

I already told you how to change that, albeit rather tersely. In the Univention Management Console edit one of the shares you want to use. Go to the “Options” tab and enable “Export for NFS clients”. Next go to the newly-appearing “NFS” tab and configure it how you want it.

However, that will most likely not help you:

As the information isn’t present, your mac probably generates it automatically from default values (e.g. it simply concatenates the fixed /home/ with the user’s login name).

Then let’s try to figure out why binding to the OpenLDAP doesn’t work instead because that’s where all the information you need is actually available.

When trying to bind against UCS OpenLDAP you have to keep the following points in mind:

As you seem to have connection against the Samba4 LDAP working, I assume that you do not have problems with TLS/SSL (meaning step 4 is likely fine already).

If that information isn’t enough for you to figure out how to bind against OpenLDAP, then please show some screenshots of the configuration you’ve tried and corresponding error messages and we’ll try to figure out what’s wrong.

Ok, as you have suggested I have imported CAcert.pem into my test Mac into the system keychain and specified that it should “always trust” that certificate.

I created an “ldapsearch” user per the wiki article and according to the article it works as expected, I was able to search the administrator user with the ldapsearch user: https://wiki.univention.de/index.php/Cool_Solution_-_LDAP_search_user

I entered the distinguised name uid=ldapsearch,cn=user,cn=skaggscatholiccenter,dc=org as well as the password for ldapsearch and I still can’t bind over ldap and I cannot even search the directory which I specified via it’s domain name so that SSL world work. I have tried port 7389 as well as enabling SSL and using 7636. Neither work. 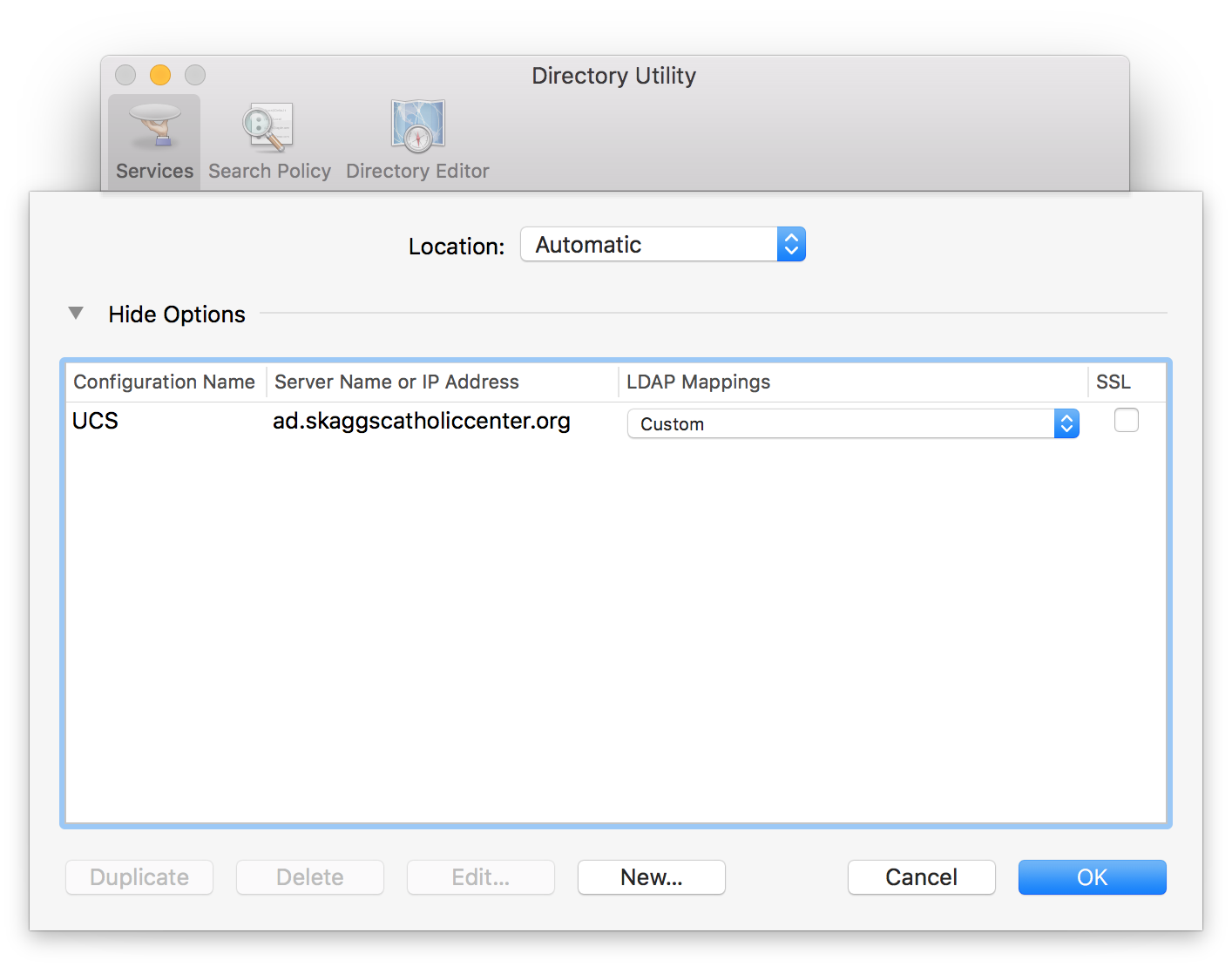 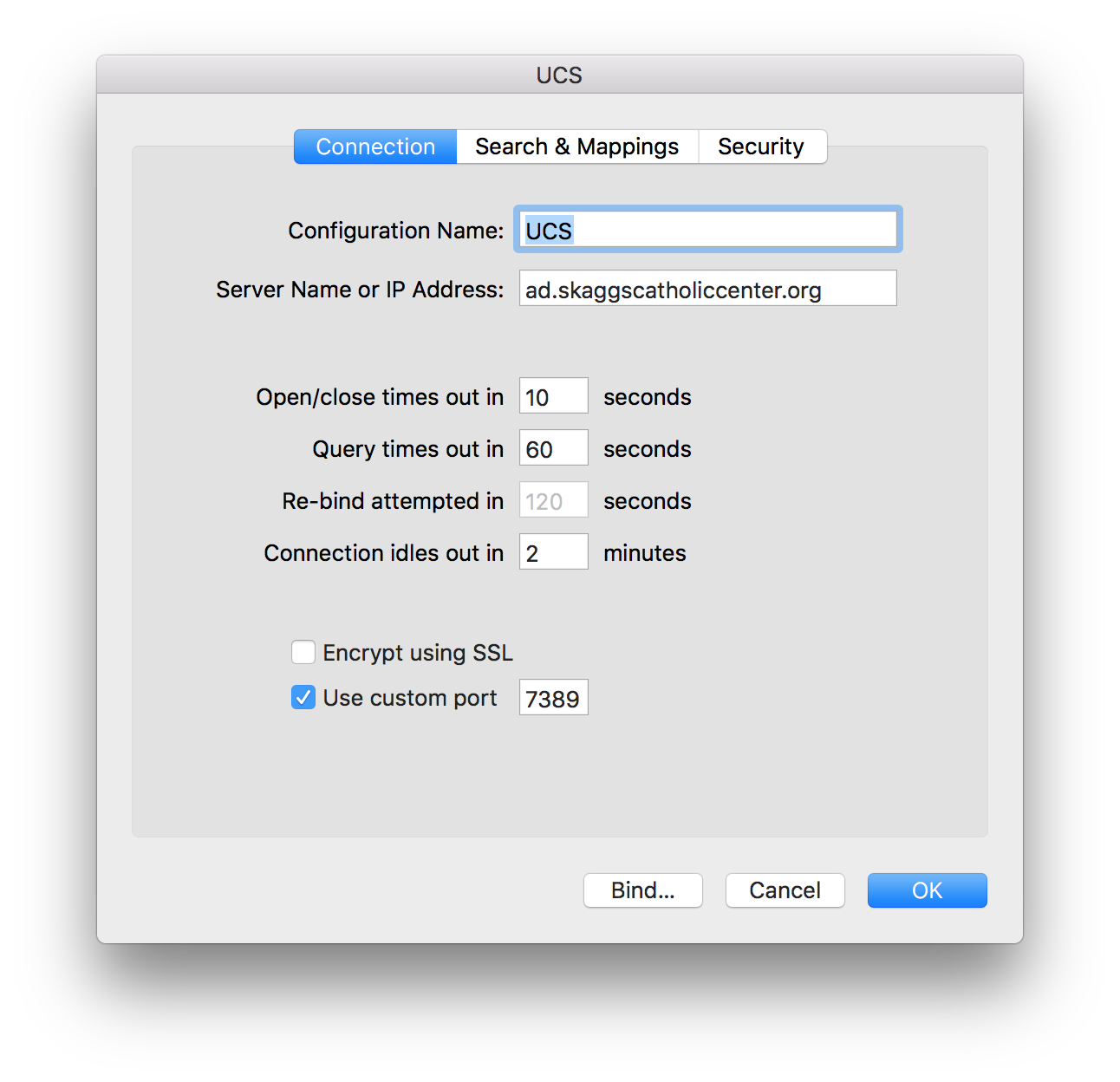 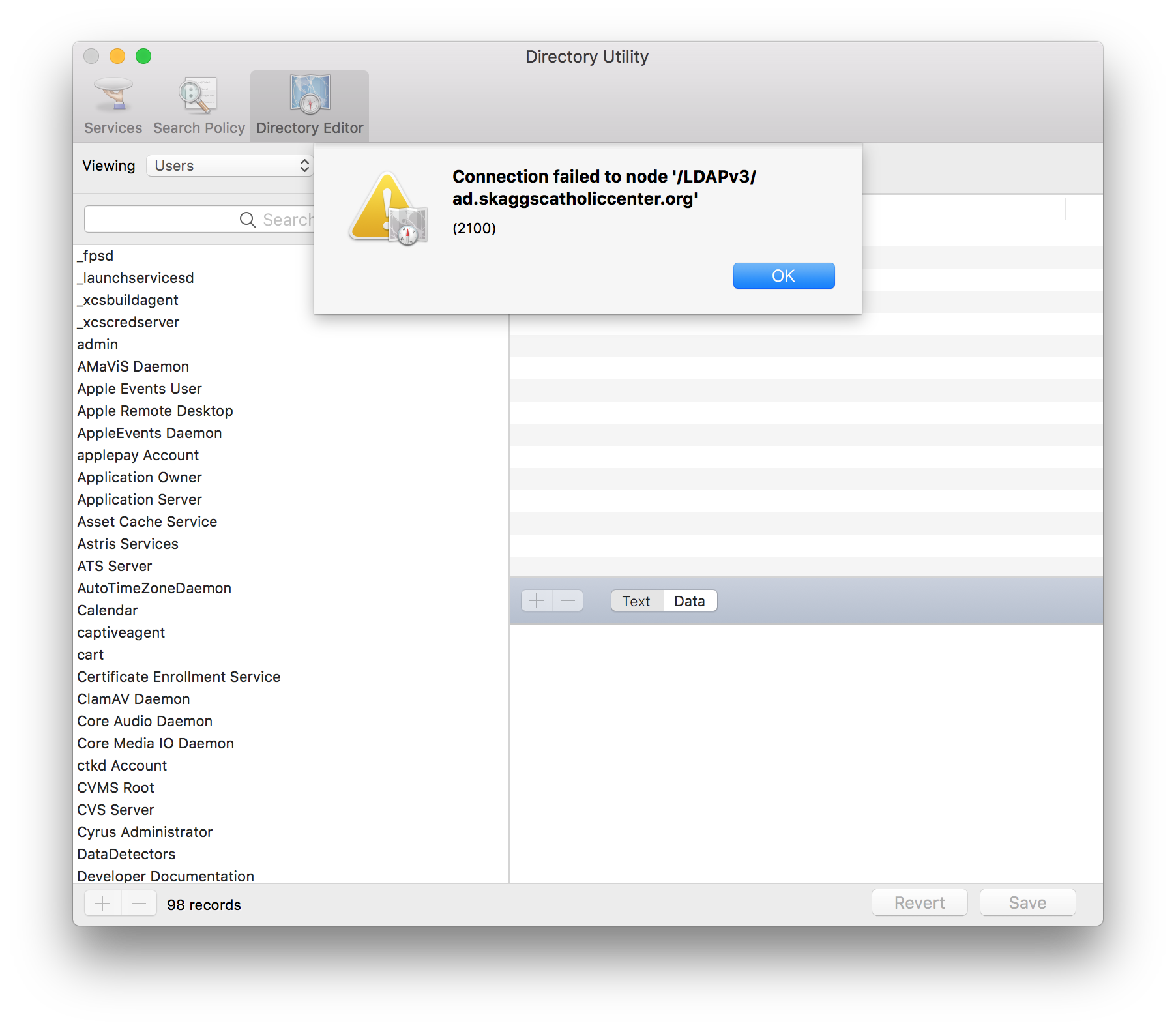 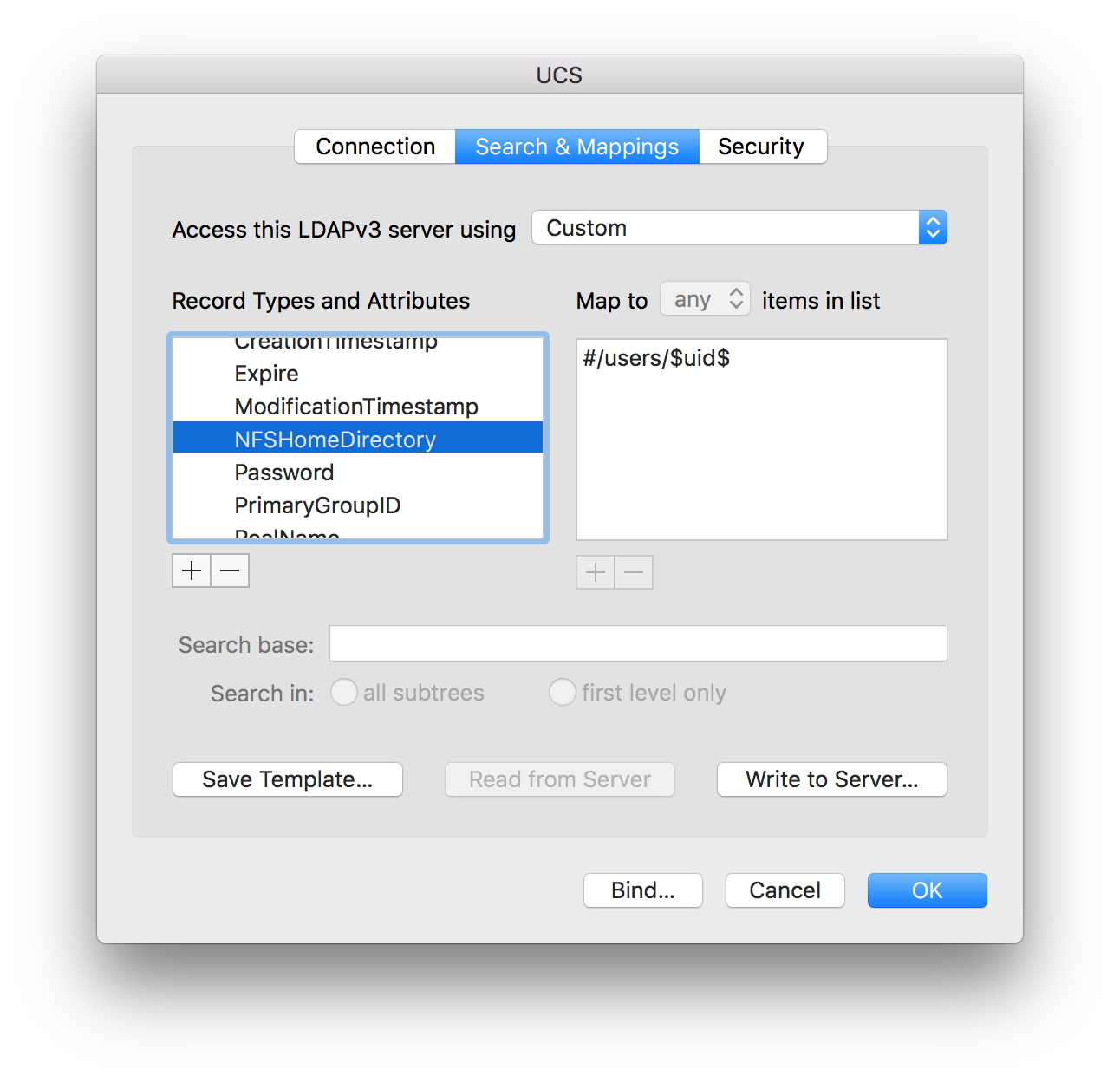 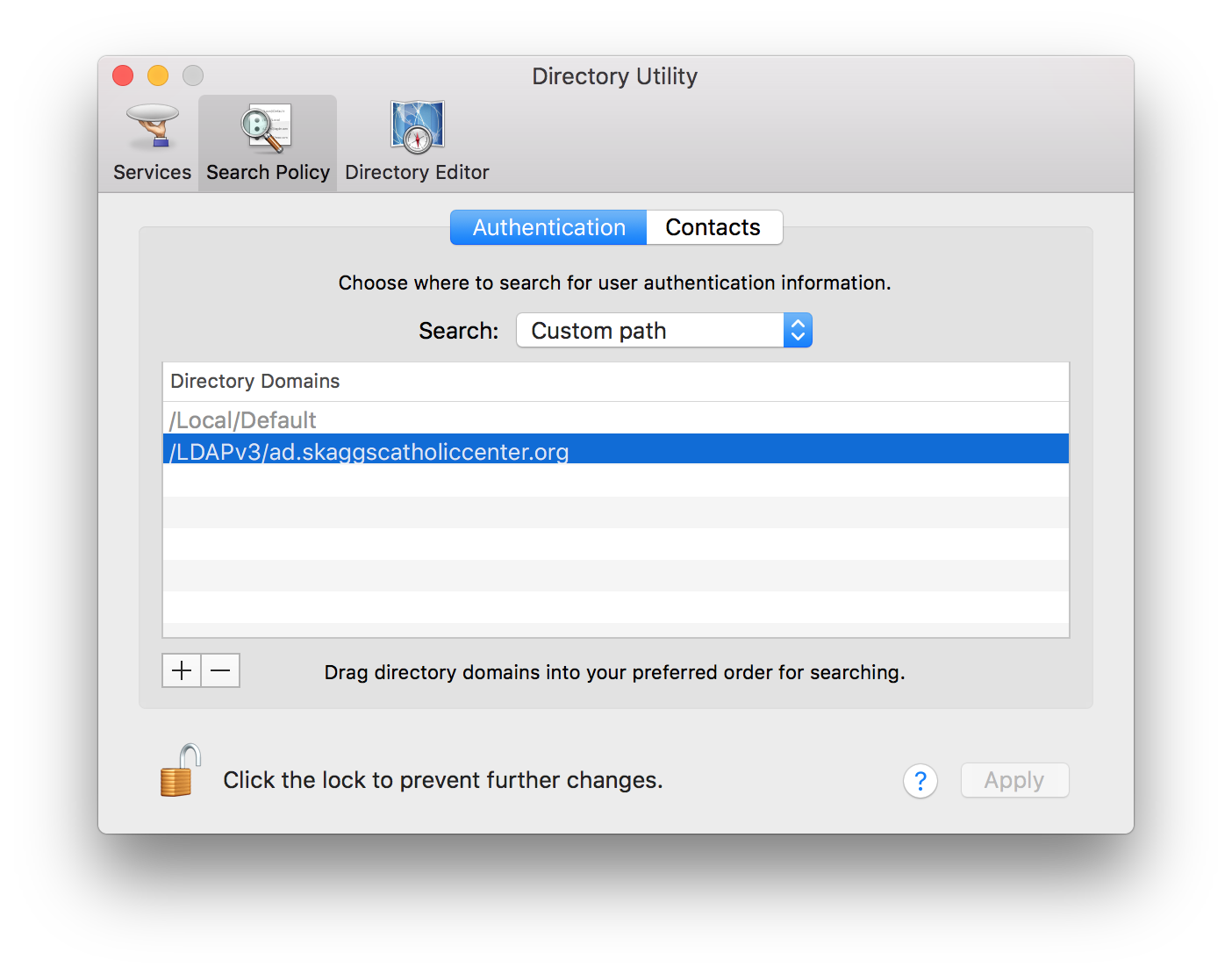 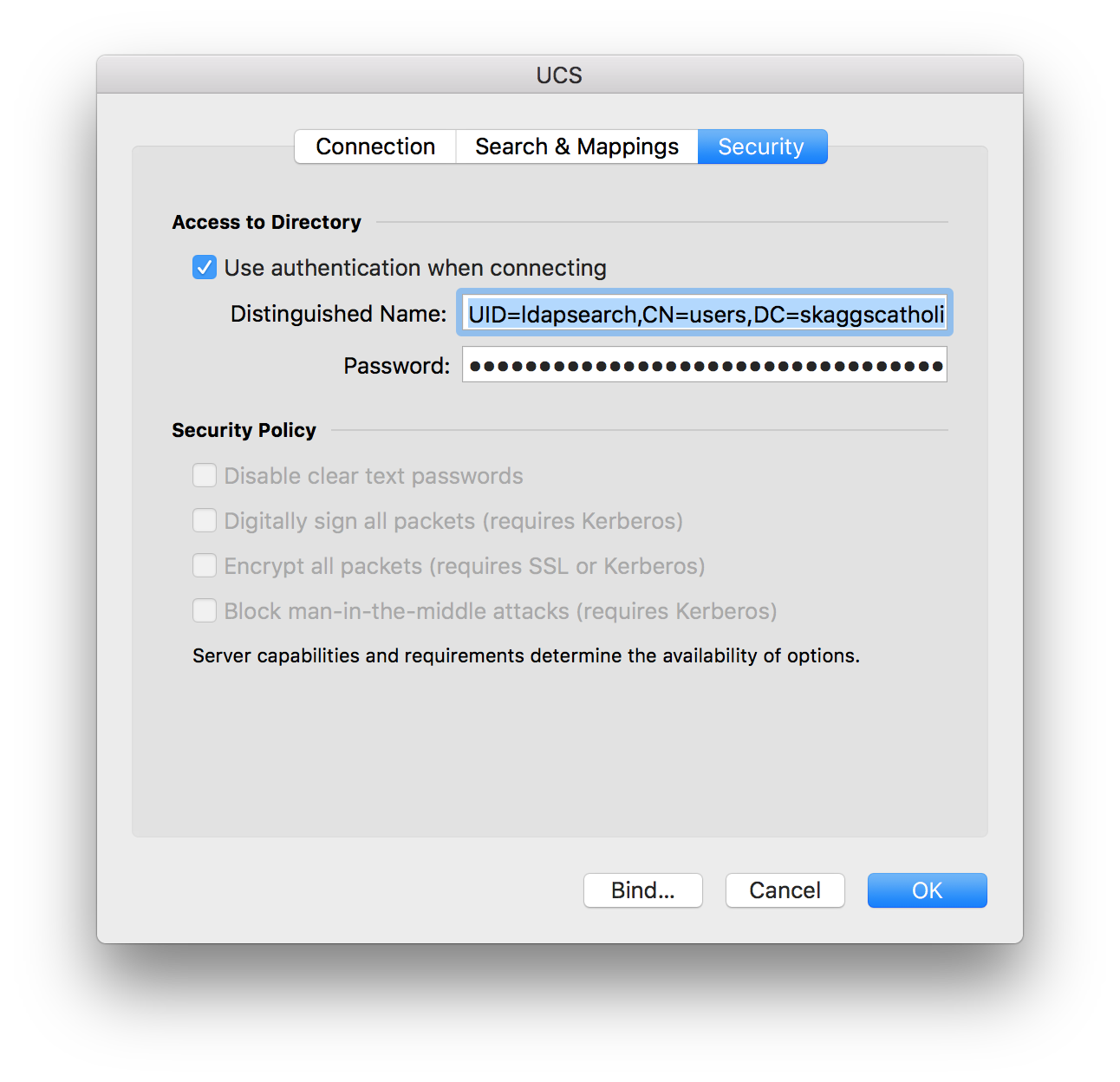 And yes UCS is doing a pure SMB share for our home folders (which is why it’s so slow).

You can see on the last line that it is mounted as “smbfs”.