Not able to connect to Active Directory Domain Controller

I have successfully deployed UCS server on a VMWare but while setting up Active directory connection it is not able to make connection to Active Directory domain controller.

I am able to ping to the AD Domain and also issue a dig command through UCS server command line but not able to connect through UCS management console.

In the /var/log/univention/management-console-module-adconnector.log I can see result of dig is throwing a connection timeout out; no servers could be reached but if you manually issue dig IP-Address it works fine.

Could some one please suggest what can be done to investigate this issue ?

In my scenario there are two domains(root and child) and DNS server is configured on the root domain so that should make child domain accessible using DNS of parent domain.
I am trying to synchronise user accounts of child domain.
Regards,
Nitin

This sounds a bit like foresting, Samba currently doesn’t support foresting, so far.

But first to your initial problem. It’s hard to guess what’s wrong, without some detailed informations, so can you please attach some output like a relevant snippet from the logs as well as the manual command, which seemed to work…

When I am trying to access child domain I can see below in /var/log/univention/ management-console-module-adconnector.log

from the source-code (’/usr/share/pyshared/univention/lib/admember.py:663’) you can see that the AD-Connector is trying to contact the MS-AD DC. Several UCR-Variables are parsed to query for tge ip address of the AD-Server.
Can you please check if your MS-AD DC is one of the following UCR-entries:

According to this, one of the following should lead to success:

If not, take care to enter your MS-AD DC’s IP address either as nameserver or as dns/forwarder.

Thanks for the information.

The domain controller is not running a DNS server role.The DNS server is in the parent domain.

The users we need to synchronise though are in the child domain that does not run its own DNS.

Is running the DNS server role on a domain controller a pre requisite?If so why is that so ?

If I run ucr search forwarder nameserver I get a list of name servers and dns forwarders and one of them (dig @$(ucr get nameserver1) +short) works fine.
Please note that my MS-AD DC IP is not specificied in either /etc/resolv.conf or as dns/forwarders but my parent domain DC’s DNS IP is in the name server config(/etc/resolv.conf).

I have tried to replicate this on my local laptop using Oracle virtual box and same topology but it works fine there but on VMWare on our test environment it is not working.

To iterate my scenario is as follows
There are two MS AD Domain Controller’s (one DC for parent domain with DNS server and another DC for child domain without DNS server.Child DC uses parent DC’s DNS server).

But if I enter IP address of child domain controller(which is not running DNS server but using parent DC DNS server) then UCS is not able to connect to it.

How can check whether it is a DNS issue or a network issue or something else?

Please note that from UCS server I am able to ping and telnet to child DC IP address but UCS is failing while issuing dig command.

I’ve looked at the code and the original desgin decisions behind it. This is what I found:

You are right, in this case the code currently tries to confirm that the given AD-DC is also a nameserver. We made that restrictive assumption because, for this first option of the AD-Connection, we later want to create these DNS records:

From my quick look at the code I have the impression that the this “dig” check could be avoided, if those records have already been created manually in your parent domain DNS server. To confirm that after manually adding them, the following commands can be run on the UCS commandline and they must return the correct values:

dig "_domaincontroller_master._tcp.$(hostname -d)" SRV @10.181.8.11 +short dig "ucs-sso.$(hostname -d)" @10.181.8.11 +short
Iff these prerequisites are fulfilled, then we actually (AFAICS) wouldn’t need to perform the nameserver check via dig. The problem is, that this check is currently hardcoded in the python source code. Speaking as a developer (not a supporter) I share my assumption that it might be possible to quickly adjust this locally on your machine. This step would require that your are confident to use an editor like “vim” on a file containing Python source code, without causing any collateral damage. I would recomend you first copy that file to a safe location to be able to recover in case something got messed up:

After this precautionary step, you can open that file with an editor of your choice and change the line

Without a test envirnment I cannot guarantee that this will have the desired effect.

Thanks for sharing you issue anyway, it helps to identify the relevance of a use case that was out of our initial focus.
We will consider your feedback to see how we can improve the product to make it usable without any hickups also in scenarios like yours.

Thanks requate for such a detailed information.I would definitely gives this a try but before this I wanted to confirm below

I am choosing the second option while deploying the UCS AD connection service “Synchronization of account data between an AD domain and a UCS domain”.

Is the above steps which you have mentioned applicable for this?

I would be comfortable to make the code changes as I am a developer.Once you confirm I will give it a try on our test environment.

Thanks again for your help.

Can you please let me know how do we add DNS entries in parent domain?

In the UMC (webfrontend) within ‘Domain → DNS’ you can enter additional Records. The correct position normally is the forware-zone.

If you want to do these steps in the terminal you can use the UDM: 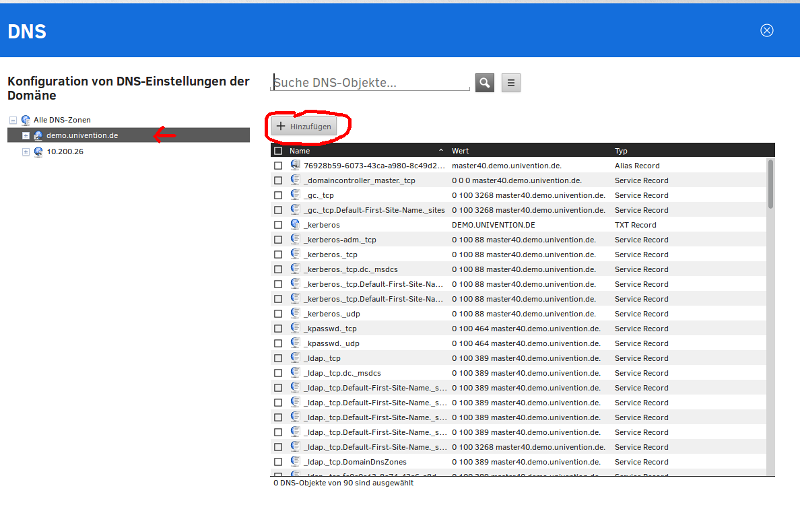 I have followed the steps mentioned by you but it is still not working although it has skipped the dig check but it fails for kerberos authentication(Please check screenshot attached).

Below error is seen in /var/log/univention/management-console-module-adconnector.log

I have checked that username/password combination is correct.

Is kerberos based on DNS?Is there a way this can be skipped through config/code change?

Can you please suggest whether we can skip kerberos authentication of is there any config through which we can fix it ?

Unfortunatly, this may be misleading. You get this message also if the following situation is present:

So you still need to find out, why the UCS does not reach the AD Server. Did you already check your network infrastructure for “bugs”? Are all essential dns records now present on both sides?

I am not able to find /usr/share/univention-samba4/scripts/check_essential_samba4_dns_records.sh in my invention installation.

I have installed univention 4.1 and only Active Directory connection is installed from the App centre.

I am running all this on my local virtual box setup and also the firewalls are disabled so should not be a network issue.

Can you please confirm which DNS entries needs to be present on AD and UCS server.Please note that I am trying to connect UCS to AD DC which does not have DNS role installed? When DNS role is installed on AD-DC it works fine otherwise it fails.

If you can let me know whether we can manually add DNS entries in UCS so that it works.

Thanks for your help.

manually adding DNS entries is mentioned already by my collegue: [url]Not able to connect to Active Directory Domain Controller] However - this should only be needed if the DNS entries are missing. Is there a reason, why you do not have the DNS role installed on the AD DC?

I have already added those and still it does not work.I have followed all the steps given by requate and stoeckigt but no luck.

In our scenario setup consists of parent AD DC and child AD DC.All users are in child domain and only parent AD DC has DNS role installed in it.
Child AD DC uses parent’s DNS server.

If you can confirm that DNS role is a pre requisite for UCS to work or if there is a work around then we can figure out the next steps based on your suggestion.

Thanks for the help.

Finally I have managed to change the code and run UCS without a DNS Server.

We need to make below changes.If some developer can suggest if there is some better way of achieving the same then that would be very helpful.

This method does kerberized LDAP lookup with the AD DC which fails for not having DNS since kerberos realm is not properly set.

This method checks if AD account user is a Administrator or account is just a member of Domain Admins or other user.

I don’t know what would be effects of tweaking the code as above but if someone from UCS dev team would suggest than that would be very helpful.

Okay, by tweaking the code you have a temporary solution, but next updates will most likely overide your additions. You need to have a look after the packages you modified. But these are only used for joins, right? After a successful join I suspect the server will not just lose its join-state.

Yes you are right next updates will override the changes but once the join state is established it won’t loose the state.

We will contacting UCS sales as we would like to go for UCS subscription before we go into production.

Thanks for your help.